Thermometers are based on expansion / contraction of an element based on temperature. The most common known thermometer for simple applications is a mercury thermometer.  As the temperature rises, the mercury expands and fills up more of a fixed volume space.  As temperature decreases, the mercury contracts and takes up less volume.  These sensors are not suitable for industrial applications due to the limitations of the element and materials used.

Thermistors and resistance temperature detectors (RTDs) measure the resistance (ohms) across a material and can work in harsh environments.  As the temperature of a material like copper is increased, the resistance to allow current to flow is increased.  Although the response of the resistance is not exactly linear it follows a curve for each material and is very repeatable.  Thermistors are very rugged and reliable.  The range of each thermistor is limited due to the specific curves they have to follow.  Compared to thermocouples and IR sensors,  they have slower response times but are also lower in cost.

Thermocouples are the most common form of industrial temperature measurement.  They can work in extreme cold and hot temperatures (-200C to 2500C) and are not affected by particulate matter.  Thermocouples work by joining two different metals together at one junction and then leaving the reference junction open in a controlled environment.  Temperature changes at the joined end produce a small voltage (via the Seebeck effect) at the open end proportional to the temperature difference between the two junctions.  Different materials for the wires are used depending on the application with the  most common industrial measurements being K type thermocouples especially for harsh environments. 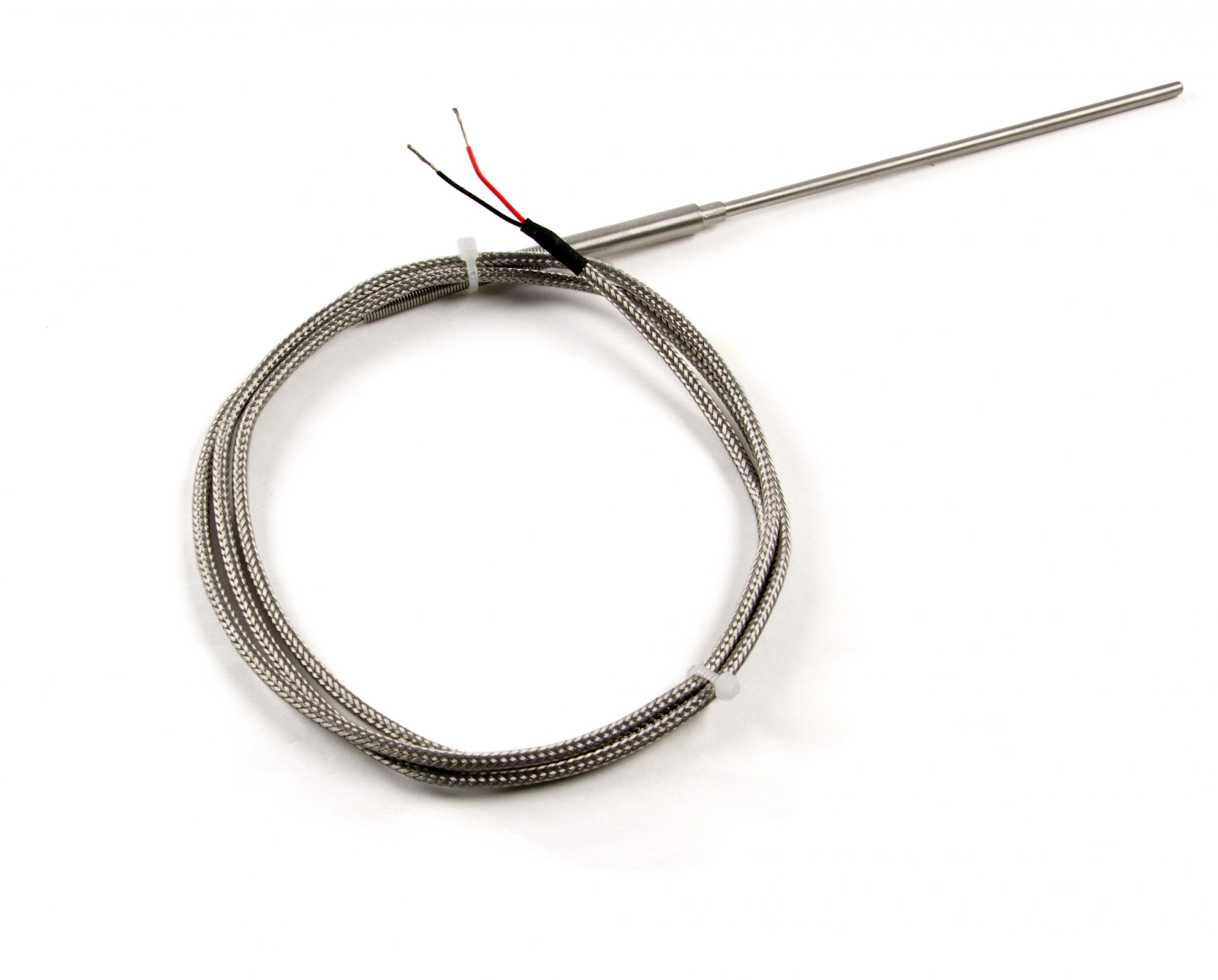 Infra Red (IR) sensors work on radiation heat detection and are non contact sensors.   All bodies emit radiation heat and these detectors use optics to focus the emitted energy onto a detector similar to a thermopile and then electronics convert to a digital readout or output signal.  Because optics are involved, IR sensors are not well suited for high particulate environments because they cause an interference in the radiation energy being emitted.

Although temperature and humidity are related in some humidity unit calculations like relative humidity and dew point temperature, they are completely independent of each other in their absolute measurement.

% Volume H2O is the best unit for expressing the actual amount of humidity (water vapor) in a process gas.  It is independent of temperature and pressure of the gas and provides the number of water molecules compared to all molecules of a process gas.  Using the Ideal gas law, other units like wet bulb temperature, specific volume (m3/kg) and humidity ratio can be calculated.  These units take into account pressure and temperature in their conversions.  The psychrometric chart belows is a valuable resource which further demonstrates the relationship between humidity and temperature.

Capacitive substrate relative humidity sensors consist of a polymer substrate with conductive electrodes on each side.  The capacitance change across the substrate varies directly with the surrounding relative humidity.  The sensors work well in clean, low temperature (below 212F) environments.  The are very useful in humidity monitoring applications such as semi-conductor clean rooms, low temperature dryer applications after air pollution equipment and lumber kilns.  In dirty environments, electrodes can get interference from particulates in the gas.  Acid gas condensation will also foul the electrodes in corrosive gases since they are not heated.  The accuracy of the sensors are typically 1% RH of the range.  When comparing 1% RH to % volume, the accuracy is good in process gases below 212F.  Above 212F, the sensors become very inaccurate and insensitive in relation to % volume.  This sensor technology is not considered a high temperature moisture sensor.

Zirconium oxide sensors measure oxygen percentage (calculated from oxygen partial pressures) of a process gas. The technology uses two sensor electrodes, one in the process gas and one in a controlled known oxygen environment. The sensors are heated to high temperatures so oxygen ions migrate and an electrochemical voltage is created across the two different electrodes.

Two sensors are required to calculate % volume H2O.  One in the process stream and one outside the process.  The difference between the two values is assumed to be % volume H2O.  The sensors work in very high temperatures and can handle dirty environments.  The main issue with this technology is accuracy.  The assumption that the water molecule is the only molecule displacing the water molecule causes error in gases where chemical reactions occur and other molecules are produced.  The accuracy of the two oxygen measurements (instead of one)  also increases the inaccuracy when measuring the % volume H2O.  Zirconium oxide sensors are considered high temperature moisture sensors.

Thermal conductivity sensors also use two sensors for a comparison.  One sensor has a 100% nitrogen gas reference chamber and the other sensor is in the process.  Dry air does not conduct heat as well as moist air so each cell is essentially two temperature thermistors and the comparison calculates the absolute humidity of the process gas.  Like the capacitive and oxygen sensors, this  again is a secondary measurement of humidity,  Really measuring temperature instead of humidity.  These sensors are high temperature moisture sensors but have issues with high particulates and condensing gas streams.

Tunable diode lasers (TDLs) use near-infra light absorption to determine the moisture concentration of the process gas.  A laser emits a near-infra wavelength light suitable for moisture absorption.  On the opposite end of the sample cell is a mirror that sends back the intensity of the light.  As humidity absorbs some of the infra-red light, the intensity is reduced and % volume calculated.  This technology can also be used for other constituents like CO2 and ammonia that also absorb infra-red light at different wavelengths.  The sensors are very accurate and can also handle higher temperatures.  The main limitation is particulates and keeping optics clean.

Dipole moment sensors provide cyclical electrical  fields that align the humidity molecules in a fixed volume chamber.  The frequency provided is specific to the water molecule to eliminate interference from other dipoles.  The sensor is an open capacitor to the process gas and the energy absorbed by the water molecules provides the number of water molecules in a fixed volume chamber.  These high temperature moisture sensors are very accurate and work in high temperature corrosive environments.

The most important qualities for industrial sensors is reliability and accuracy.  If a manufacturer is going to implement a sensor as part of the control scheme, it cannot drift or need a lot of maintenance.  Industrial plants don’t have the personnel to “babysit” temperamental sensors.  They also cannot afford to have the sensor drift and take the process out of control.  Ease of calibration and accuracy checks are required in these applications.

From a reliability and durability standpoint, the wetted sensor materials must be able to withstand corrosive, high temperature and high particulates gas streams.

316SS is recommended for most industrial applications.  Heated sensors further protect the sensors from acid gas condensation and corrosion.

Lastly high particulates can foul secondary measurements like the capacitive and chilled mirror measurement or interfere with optical sensors like TDLAs.  The ideal sensor is in-situ that won’t foul or clog.

Humidity 2 Optimization sensors are designed to overcome all of the limiting factors listed above.

The probes are made of 316SS and heated above the process temperature to operate reliably in corrosive gas streams.

Lastly, H2O also developed an aluminum oxide filter with pore sizes between 50 and 100 nanometers.  Almost all particulate matter is larger than our pores in industrial applications  so the filter will not blind.

The sensor obtains the sample by diffusion so there are no mechanical parts pulling a sample and blinding the filter by exerting a negative pressure on the filter.  The only requirement for the H2O sensor in high particulate environments is positioning the probe perpendicular to the process gas.

Everything you wanted to know about the H2O Moisture Sensor.
Download the PDF

Get a Quick Quote

Got a minute?
Fill out our
quick quote form.